THE SMARTER YOU TRAIN, THE FASTER YOU SEE RESULTS.

Before I discovered Njinga, I’d been sedentary for almost 10 years, hadn’t ridden a bike in 20, and at my heaviest, I weighed in at 18 stone. And the hobbies I had picked up didn’t feel enough: football three times a week, climbing Whitespider twice a week, and a handful of running events (usually half-marathons) thrown in the annual diary for good measure. My weight made me a slow runner, and while football and climbing were fun, they never felt like ‘enough’ for me.

"I AM SO GRATEFUL TO THE ENTIRE NJINGA TEAM AND INCREDIBLE COMMUNITY. IT HAS BEEN HUMBLING, MOTIVATING, AUTHENTIC AND EXCITING." 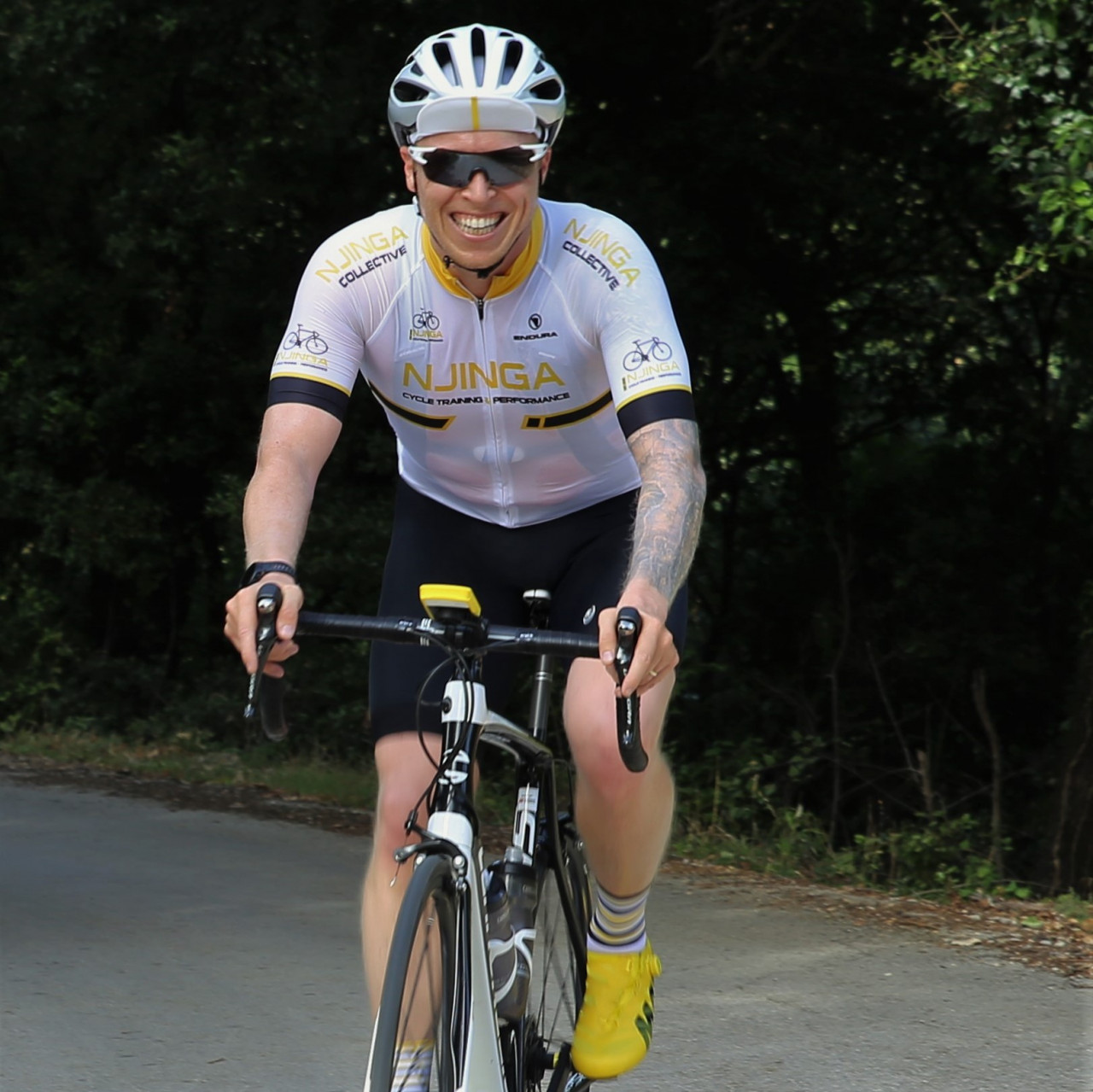 It was a client of mine who piqued my interest in Njinga and eventually introduced me to the team. What I expected when I first stepped foot inside Njinga was a win-or-die, high-testosterone environment. The reality? The total opposite.
Njinga is made up of a community of friendly and supportive people who just happen to be cyclists.
And while there is a competitive edge to the training, it’s only for those who want it. The few who do compete side-by-side do so in a way that encourages everyone to put their best foot forwards. We all ride in training zones so that even if your output levels are different, you are actually working at the same capacity. We all experience the same pain and glory.
Everyone works so hard and tries to better themselves every step of the way. It’s such a refreshing culture.

NJINGA MAKES YOU FITTER IN ALL AREAS
My first Njinga session was in February 2018, over two years ago, and I’ve been in regular attendance ever since. My fitness is so much better now than it ever has been before – I feel like an 18-year-old who could just run all day. On average, I’ll get between 3 and 5 sessions per week and while I no longer partake in climbing as an activity – I’d much rather cycle! – I have run six half-marathons and 2 ultra-marathons since my first day in the lab, and I’ve done no training runs. Zero! All my training has been on the bike.
I’ve become addicted to numbers in a way that I can measure my own progress and development, which I’ve never been able to do in any other sport before.
The stats speak for themselves and thanks to the help of Njinga, I’ve improved my 20 minute FTP score by 60 watts from 241 to 301 watts and more recently my 60 minute FTP by 22 watts from 259 to 283 watts. On top of that I improved my 30 second max power from 300 watts to over 950 watts and made the All Time Njinga Leaderboard. The training works!

The coaching and support has spurred me on to win several Njinga Grand Tour jerseys and the prestigious Njinga World Championship jersey. I’ve also successfully completed several sportives including Ride London 100 and the Tour of Cambridgeshire, etc. I love football but cycling has become my passion.

Njinga has not only stolen my heart but my wife’s, too. Within weeks of my starting with Njinga, I managed to get Catherine equally as hooked.

For the first time in our 20 years of marriage, we have an active hobby that we both love.

There’s nothing like having someone who completely understands you when you come home from a lab session and talk about what you’ve just achieved, the numbers you’ve just pushed.

My lovely client was right: Njinga is custom-built for people like me.

Togo was able to develop a remote coaching plan for me that suited my body’s makeup, personal strengths and the limited time I have to train as I run my own business, and Catherine and I have three small children. Togo has continuously modified my training plan to keep me committed and focused. It’s like he says:

“It’s all about quality over quantity training sessions.”

I am so grateful to the entire Njinga team and incredible community.

It has been humbling, motivating, authentic and exciting.

I am and will always be an Njinga advocate and I would urge anyone with a cyclist hidden inside themselves to join and give it a go! 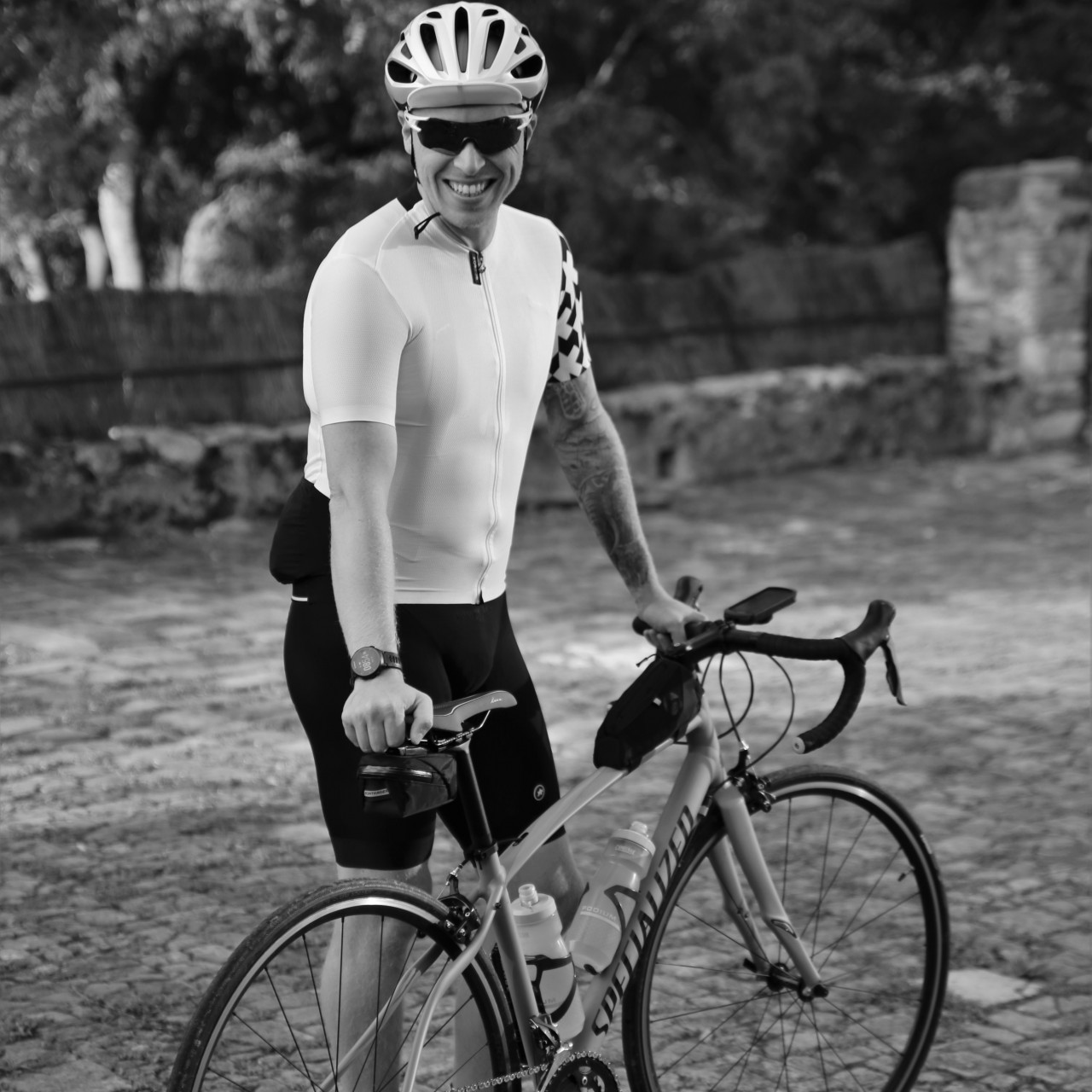 "I AM AND WILL ALWAYS BE AN NJINGA ADVOCATE AND I WOULD URGE ANYONE WITH A CYCLIST HIDDEN INSIDE THEMSELVES TO JOIN AND GIVE IT A GO!"

A NOTE FROM THE COACH

Stewart’s cycling journey has been nothing short of sensational. From a total novice cyclist to confident powerhouse on the bike. Just shows you that training smart yields results! He has listened, learnt and worked hard to achieve these results while running his own business and juggling training around family and work.

Stewart fast became one of our strongest sprinters in the Njinga lab and constantly achieved over 1500 watts post-training session for our peak power tests under fatigue. Then he joined the 300 FTP club and during this time he has completed several Njinga training camps, completed the Njinga Challenge Series no.3 and loads of UK sportives. And to think a few years ago Stewart could not do more than 30km and now he is doing up to 160km.

We completed our full power profile range of test on Stewart and his strength lies in the shorter distances so we are currently training  him for 40km Individual Time Trials. He has some serious potential to go far and more recently he has started representing the Njinga Collective in the Zwift racing league and has won a number of races.

Just proves anything is possible if you train smart and put your mind to it.