Since starting her journey at Njinga Phoebe has lost over 10kg I’m so much lighter in spirit.

Completed in our 2018 Njinga World Champs and came 1st in her age group and 3rd overall.

READ HOW PHOEBE TRANSFORMED HER FITNESS, NUTRITION AND MENTAL HEALTH WHILE ALSO LOSING OVER 10KGS / 22 POUNDS IN WEIGHT. A TRULY INSPIRATIONAL STORY.

Before joining Njinga, I never did cardio workouts. Only weight training. I knew about Njinga through my mum and dad who were regulars and had been nagging me to try out a training session out to no avail: Njinga just didn’t appeal to me. It seemed way too expert and intense: everyone looked really fit and I knew some members were already outdoor cyclists. I’d almost definitely be rubbish at it, so what was the point?

At some stage, my parents’ nagging turned into bribery: they’d pay for my first few indoor training sessions. A ‘try-before-you-buy’ approach, if you will, and one that gave me nothing to lose.

"I CAN’T SAY ENOUGH ABOUT HOW NJINGA HAS IMPROVED MY MENTAL HEALTH AND WELLBEING. I’M SO MUCH HAPPIER AND CONTENT IN MYSELF." 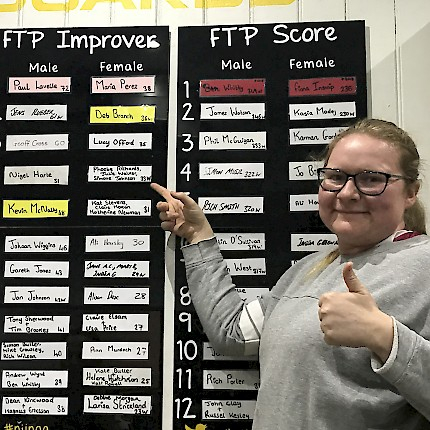 So off to Njinga I was. My first training session And, surprise surprise (or perhaps not so much of a surprise, since you’re reading my Njinga success story), I loved it. The instructors were fantastic, the music was great, and the workout itself was broken down into intervals with breaks for recovery. By the end of the session, I was a sweaty mess and full of endorphins, the kind I’ve never experienced from weight training. I understood immediately how Njinga sessions can get you hooked.
THE DREADED FTP TEST

Something else that was immediately apparent to me was the importance of an FTP test to my training as all indoor Wattbike sessions are built around your individual training zones. And yes, FTP tests are hard (I hated my first one), but now I see them as a personal challenge. At the time of writing, I’ve done four tests within one year.
In my second test, I improved by 33 watts and got myself onto the All Time FTP Improver Board.
By my fourth, I was smashing my numbers and earning extra Njinga World Championship points (see next section). Overall, my FTP tests have allowed me to train smarter and manage my efforts better by staying in my set training zones throughout training session intervals. I also really enjoyed tracking my cycling fitness progress every month.

FROM FTP TO PERSONAL GOALS

Across an entire year, Njinga hosts a variety of competitions such as the Giro d’Njinga, Tour de Njinga and the Vuelta a Njinga which allow you to rack up points for their Njinga World Championship (it’s not as intimidating as it sounds, I promise).

My ever-improving FTP test results and the Njinga World Championship have driven me to push myself even further, increase my training attendance, diversify the types of training sessions I attend, and set a series of personal goals for myself.

My first personal goal was the Giro d’Njinga and, not only did I exceed my own expectations, but I won the sprinting competition – something I recognise now as a strength, having come top of the Sprint Finale Power Profile board.

My second personal goal was an unexpected one: a few weeks away from the end of 2018, I realised I was a contender for the Njinga World Championships: there were only five points between me and the leader.
So I doubled down on my efforts, did some double training sessions (aided by Sober October) and, though I realised I wasn’t going to close the gap and win, I won my age category by pushing to get my overall World Champ score as high as it could be.

Since joining Njinga, my overall wellbeing has significantly improved: I’m so much lighter in spirit; I’ve lost over 10kg / 22 pounds; I’ve given up smoking; and at the time of writing, I’m contemplating outdoor cycling.

It seems I’m becoming the quintessential Njinga member, the type that put me off joining Njinga in the first place – ha!

And as for the community, it has been one of the most important and life-changing things to come out of Njinga.

I’ve made so many new friendships which have given my Njinga experience an extraordinary new dimension. What could be more fun than getting to training and working out with a group of friends?

“It never gets easier. You just get faster,” is a quote you’ll find plastered on the wall at the Njinga Lab. And it’s true: it’s been incredible to see how I’ve progressed and how my numbers have just kept on climbing, month-on-month.

As I write this, it’s the end of 2018 and I’ve already got my 2019 goals mapped out: I’m going to take on some Mountain Goat training sessions (which I have, so far, avoided); I want to get on two of the boards in the Lab, the Peak Power and the FTP scoreboard – which means I might knock off my mum; and I’m going to join the Firestarter Programme in January to kickstart my year. By the summer, I’m hoping to get out on the road in cleats and join the Njinga Collective.

I can’t say enough about how Njinga has improved my mental health and wellbeing. Since starting Njinga, I have consistently set personal goals for myself which have given me the focus outside of the work that I needed to reduce my day-to-day stress. And I’m so much happier and content in myself.

To anyone considering joining Njinga, do it.

Whether you want to improve your fitness or cycling, Njinga’s workouts are based on your own personal levels which means you’re never expected to take on more than you are capable of.

The instructors are awesome and the community is phenomenal. Everyone is always so encouraging, supportive and welcoming to new riders.

Though it’s no secret that I was sceptical about coming at first, I’m so glad I took the bribe. (Okay, okay, mum and dad, you can say ‘I told you so’.) 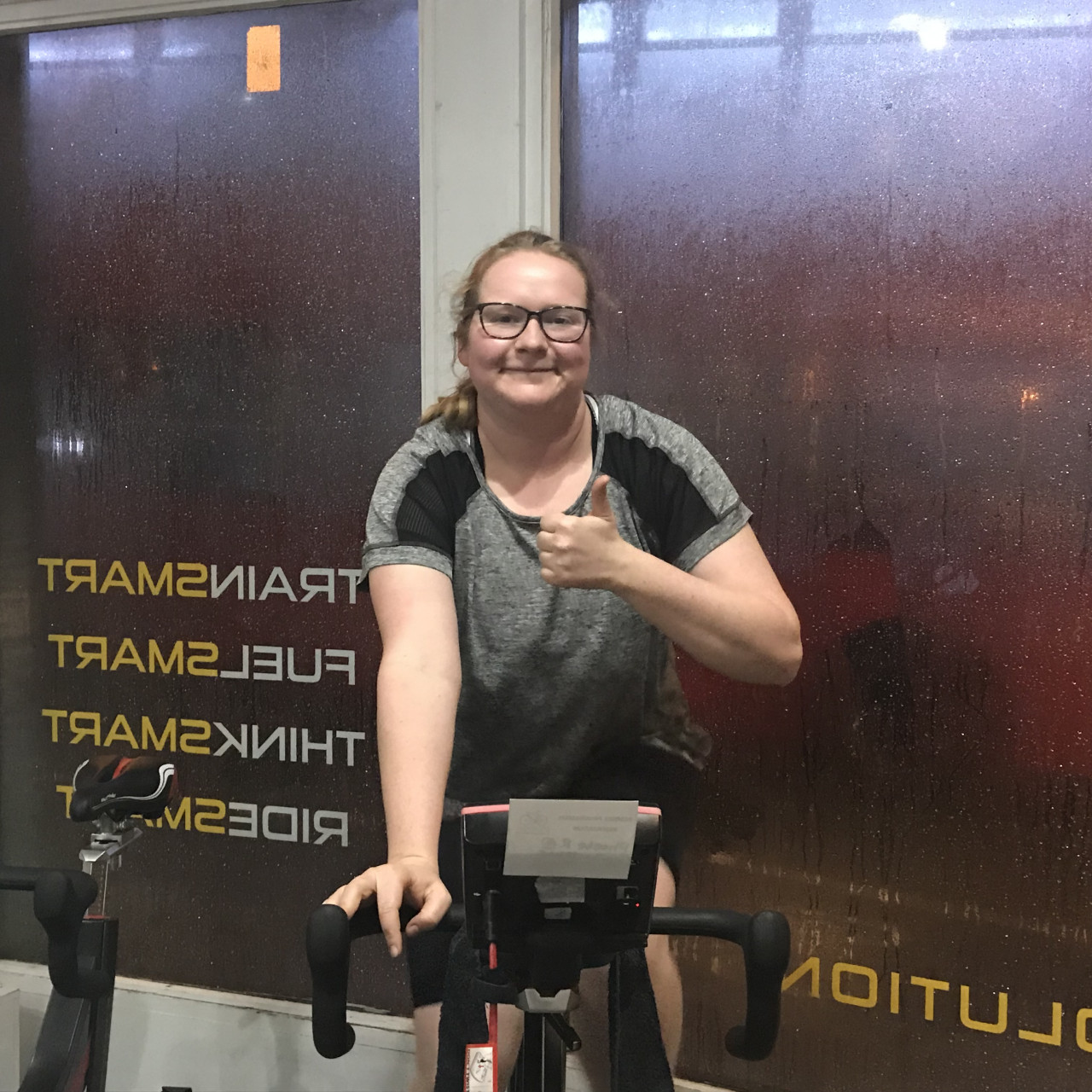 "THE INSTRUCTORS ARE AWESOME AND THE COMMUNITY IS PHENOMENAL. EVERYONE IS ALWAYS SO ENCOURAGING, SUPPORTIVE AND WELCOMING TO NEW RIDERS."

A NOTE FROM THE COACH:

It's been incredible to see the transformation in Phoebe. When she first arrived at the Njinga Lab, she was so apprehensive and anti-cycling. I knew when I met her that we just had to find what motivated Phoebe. Without pushing her, we just kept encouraging her and giving her loads of support. In fact, our entire coaching team played a big role in growing her confidence and, within a month, she started losing weight and gaining leg strength.

I remember setting a power sprint challenge at the end of the training session when all the riders were fatigued and asked them to go ‘one step deeper’ and give me everything! Wow, Phoebe stepped up. And from that day forward, I noticed we had ignited a fire within her. She loved being challenged and particularly enjoyed the short power sprints at the end of the group training sessions. She was fast realising she was a natural sprinter on the Wattbike.

Her journey with Njinga has been nothing short of inspirational. From losing so much weight to making the All Time Njinga leaderboard for FTP Improver, the Njinga Peak Power leaderboard, and then winning the Njinga World Championships. It’s been a remarkable ride for Phoebe and we're so pleased to see her thriving with our Njinga community. She is a happy, confident rider now, and her desire to win and even challenge the boys is testament to her gritty determination.

Finally, I am so proud to see the entire Team Richards family still training with Njinga.