SETBACK ON SETBACK AND STILL SHE CAME BACK AND SHATTERED RECORDS, WON RACES AND SET NEW PB’S

I used to do sprint triathlons – 750m swim, 20km bike and 5km run – and, to be frank, cycling was the only bit I was ever any good at: I’d have an average swim, storm it on the bike, and then cling on as much as I could on the run.

Unfortunately in 2014, I was diagnosed with advanced bilateral hip arthritis (due to funny shaped hips) and was told I'd have to stop running. To try and preserve my left hip for as long as possible, I had an operation – a rather nasty thing called an open hip dislocation and debridement. Post-surgery, to keep me active and fit, I decided to take up road cycling due to it being recommended to me as a non-impact sport.

"JUST OVER A YEAR AGO, I WONDERED IF I’D EVER BE ABLE TO RIDE A BIKE PROPERLY AGAIN. I GENUINELY THOUGHT I’D NEVER GET ANYWHERE NEAR MY POWER NUMBERS AGAIN, LET ALONE SURPASS THEM." 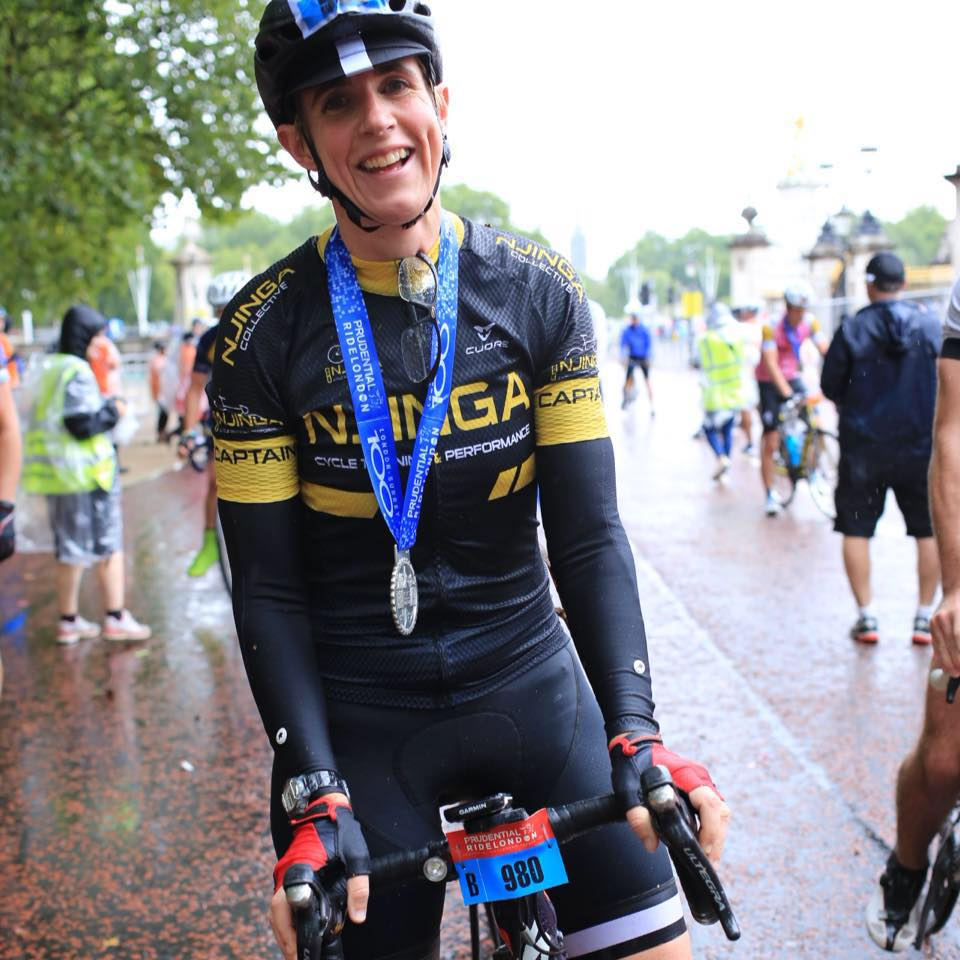 It was a few months after this operation that the Njinga lab opened and I popped in to try out the wattbike. From there, I started regularly attending indoor wattbike sessions, enrolled in a programme, and joined the Njinga Collective, Njinga’s not-for-profit outdoor cycling club.
I slowly and painfully began to regain my fitness with the coaching support and help of Njinga. To help keep me motivated to train, I set a new goal and signed up for the Tour of Cambridgeshire the following year as it was a qualifying race for the UCI Gran Fondo World Championships in Perth, Australia. I had entered the Individual Time Trial (ITT) and the Road Race. My main focus was the ITT and I was going to ride the road race the next day for fun.
I was so pleased to come 8th in my age group overall for the ITT but gutted to have lost out on qualification by seconds. I gave everything and to come so close was heart breaking. I got up the next day and rode the road race on tired legs with nothing to lose and gave everything. It was a tough race as we were mixed with the men and only later in the day I found once all the results were in that I had in fact qualified for the UCI Gran Fondo World Championships. What a day!

Unfortunately, my left hip continued to deteriorate and I had to have a second operation, this time for a total hip replacement.
Although successful, I had post-op complications with my back. There were plenty of tears, lots of frustration, endless (and ongoing) rehab exercises, and some very dark days.
Just over a year ago, I wondered if I’d ever be able to ride a bike properly again as I struggled to sit in the saddle for longer than an hour and always developed numbness in my right leg and foot. I genuinely thought I’d never get anywhere near my power numbers again, let alone surpass them.
Dark days turn to new records and PBs
Despite everything, in 2018 I achieved an Njinga Lab record for the highest female FTP score of 236 watts and first place on the All Time Ladies Njinga FTP Score leaderboard.
It might just be a number, but for me personally, it represented so much. 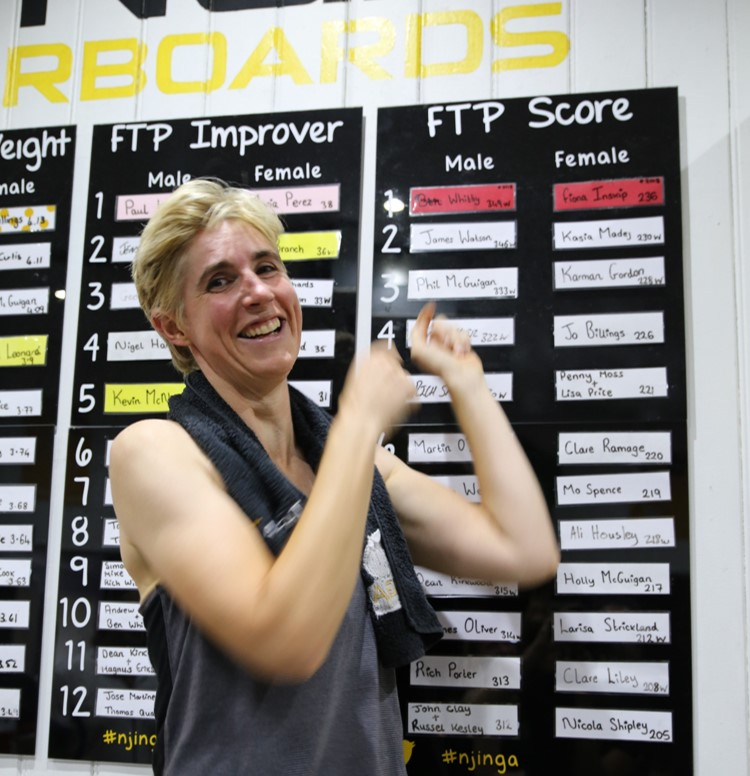 What no one ever sees are the struggles away from the bike. Before my hip replacement, getting on the bike was a way of hiding that I was struggling to walk; I used to commute on the bike because I literally couldn’t walk the 15 minutes to the station. I had to carry a fold up walking stick in my bag just in case I got ‘stuck’, to try and help me take one small step after another (and this happened a lot).

Getting on the wattbike in the lab made me feel ‘normal’ like everyone else. It was my escape that helped me both physically and mentally. 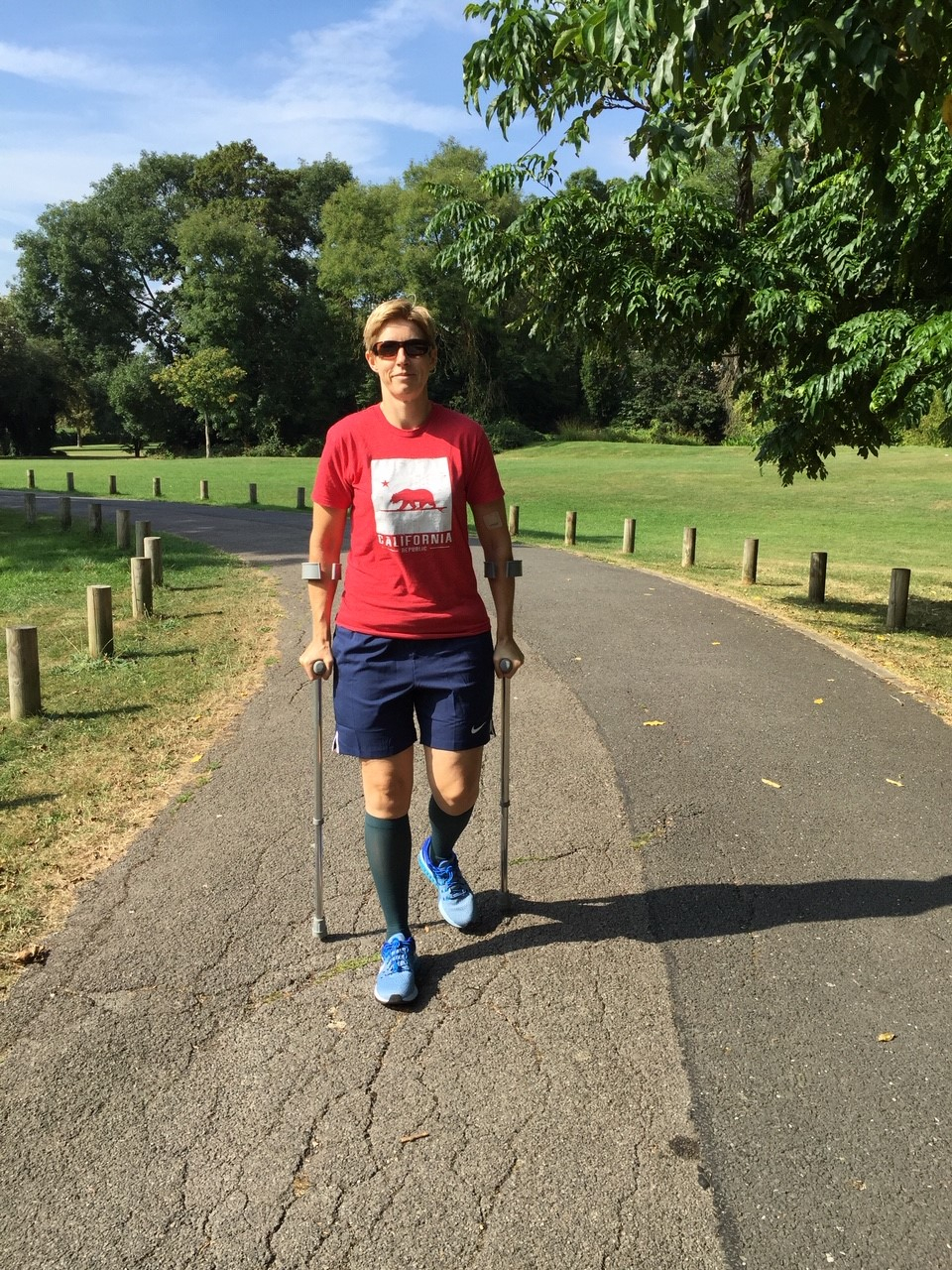 Throughout it all, there has been one constant, and that’s the support of the Njinga family.

The co-founders, Togo and Leigh: your generosity in always offering me time in the lab as part of my rehab, even if it was sitting at the back spinning my legs.

Njinga coaches, Josh and Jon, being there to build me back up during the programmes and pushing me up and up week after week.

The encouragement from the Njinga Collective – slowly helping me get back on the saddle (literally) as a Ride Captain with Mbidzi – the other Ride Captains and riders.

Everyone has been so supportive. I’ve also been motivated by watching the achievements of everyone else, be it someone’s first ascent of Box Hill or Debs wearing the rainbow stripes and winning one of the UCI Gran Fondo World Qualifier races. It’s been wonderful to witness.

I’ve had to learn to be patient, to listen to my body and, most importantly, to focus on the things I can do and not worry about the things I can’t. In the last few months, it’s suddenly all come together again.

My goal for 2018 was to simply try to get back to riding properly again.

But with all your support, and at the time of writing, I’ve completely surpassed that goal and I wouldn’t be back where I am today without all of your help and encouragement.

Every day I look at my scars and feel lucky to be doing what I’m doing. There are plenty of people who’ve things far worse, so I’m grateful to have been patched up (although I’m hoping the other gammy hip holds out for a bit longer as I’ll happily wait a few more years before the other op!).

Finally, I was overwhelmed by my FTP test result (a new lab record) and couldn’t have done it without the support from all of you over the past couple of years. I know there’s more to come, I can’t wait, and I can’t thank you all enough. 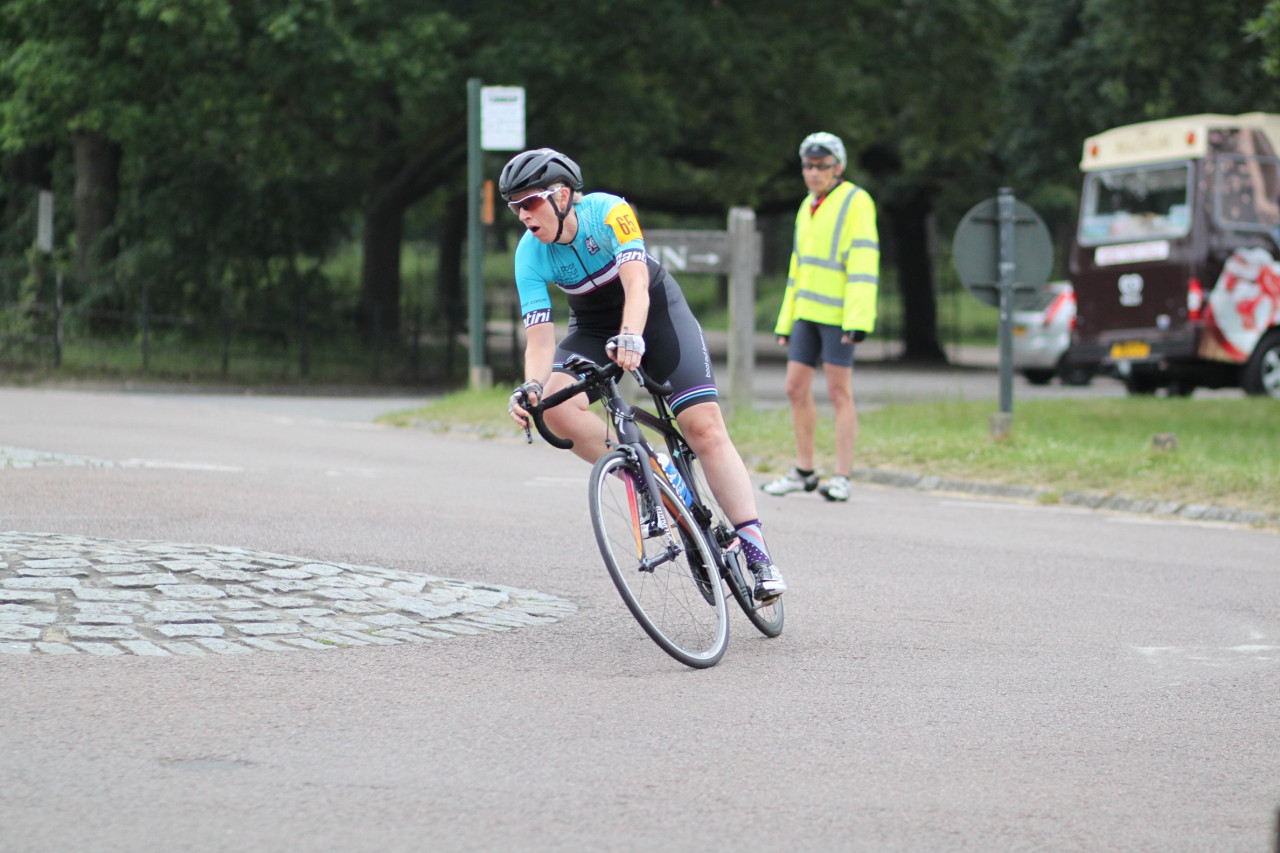 "BUT WITH NJINGA'S SUPPORT, I’VE COMPLETELY SURPASSED THAT GOAL AND I WOULDN’T BE BACK WHERE I AM TODAY WITHOUT ALL OF THEIR HELP AND ENCOURAGEMENT. "

A NOTE FROM THE COACH:

Fiona is the comeback kid! They say you don’t truly know a person until they are faced with adversity. It's incredible to have witnessed how Fiona coped and dealt with the situation. I remember coaching Fiona on her first group indoor programme and she impressed me with her stamina and determination. She had a hunger in her eyes and a winning mentality.

The easy bit for the Njinga team was coaching her, as all we had to do was lay out a well structured progressive training plan and keep her motivated and hungry. Winners thrive in an environment where they feel safe and can learn. Fiona exceeded our expectations and since being with Njinga, she has gone on to win several Individual TT events both locally and regionally and qualifying for World Champs in 2016.

Despite all the challenges she has faced over the years, Fiona is back to her best again and during Covid-19, she has excelled at racing on Zwift and has podiumed in several top races.

I know there is more to come from Fiona. She is a true inspiration to us all as a person and rider who has given so much back to our community as a ride captain, racer and role model.